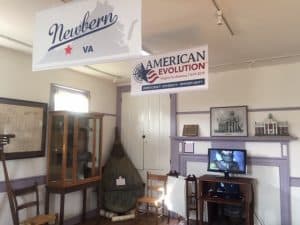 Our Summer 2019 Exhibit “American Evolution along the Wilderness Road: Democracy, Diversity, and Opportunity” shows Newbern and the New River Valley as models of the evolutionary process that allowed Virginia to influence the direction of American culture. Our exhibit highlights this important truth: What happened in the New River Valley along the Wilderness Road happened throughout Virginia and throughout the country as a whole.

Viewers of our exhibit are invited to consider how the American Evolution themes–Democracy, Diversity, and Opportunity–intersect, overlap, and feed each other as we tell the local stories of American Evolution.

One such story involves Mathias Vogl, one of the thousands of European immigrants who traveled the Wilderness Road, some of whom settled in the New River Valley. In search of new opportunities and freedoms, many of these immigrants took trades and skills from the Old World and brought them here. Mathias Vogl used his skills as a tailor to make a living in Newbern.

Vogl was a part of the second wave of Prussian immigrants in the early 19th century. He first appeared in Newbern in 1848. On exhibit at the museum now are his detailed tailor’s patterns, as well as a small handbook of tailoring procedures he patented and left to his son. Most of the instructions were written in Vogl’s native language of German. His shop would have been located on Lot #11 in the Village of Newbern, as it was laid out in 1810. 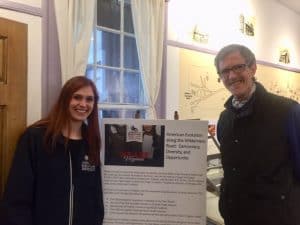 Dr.Jim Glanville will present “William Preston and the Making of America” on Sunday, March 18, 2 PM at the museum. The talk will address Virginia’s role in establishing a nationally-accepted model for local governments. William Preston served as a land surveyor for Fincastle, Botetourt, and Montgomery Counties before his death in 1783. Preston saw many territory exchanges and county formations in his time, making him a very interesting historical figure to study on a local level, as well as a national level.

Glanville is a retired chemistry professor living in Blacksburg, VA. Born in London, England, Glanville emigrated to the United States in 1962, where his professional career included jobs in the chemical industry and academia until his retirement in 2004 after spending twenty years at Virginia Tech. Glanville has an “encore career” as an independent scholar of history and archaeology of pre-1800 southwest Virginia and the area he has named “Holstonia.” Visit his website, www.holstonia.net, to learn more about Glanville and to see many of his publications and presentations online, several featuring more about William Preston.

The New River Historical Society is excited to announce its annual Genealogy Workshop at the Wilderness Road Regional Museum, “Researching Our Family History” A registration fee of $20 includes coffee and donuts beginning at 9 a.m. and a lunch of soup and sandwiches.

The purpose of this exhibit is to show museum visitors the clothing, shoes, and accessories of the 19th and early 20th centuries. Because early photographs often show very stoic black-and-white images of people, a vibrant and multidimensional view of the people’s fashion over time allow visitors, especially younger people, to associate more humanity with the colors and patterns (red paisley scarf), the trends (pannier hoops – bustles on the sides instead of on the backs of dresses), the unexpected (early 19th century brassiere that looks like a loose-fitting silk camisole, a stark difference to the tight-fitting corsets) and the gaudiness (bird-adorned hat). Some local stories are included in the exhibit – Jennie Cloyd Wysor’s beaded purse; Sarah Jackson McGavock’s wedding shoes, wedding photo, and calling card; and crudely stitched garters from niece Gertrude to aunt Gertrude from Eagle Rock, VA. On Saturday, March 28, The Pulaski County Civil War Sesquicentennial and the Wilderness Road Regional Museum will be hosting a Living History event to commemorate the end of the American Civil War.

On Saturday morning March 28, 2015 the 45th Virginia Infantry will be leading a march from the Rail Road Depot in Dublin to the Wilderness Road Regional Museum in Newbern. The march will begin in Dublin at 9:00 am with the Soldiers arriving in Newbern at 10:00. END_OF_DOCUMENT_TOKEN_TO_BE_REPLACED

I’m Katelyn Crispino, a new intern at the Wilderness Road Regional Museum. I’ve grown to love history because of the different people that have had a large influence in my life. I remember Grandbobby, my grandpa, watching the history channel almost every time I visited, my dad reading books on Abraham Lincoln, and my mom taking me on adventures on the paths around the Manassas Battle Field. All these things influenced my decision to enter the field of history. As museum intern, I intend to write informative biweekly articles on the artifacts found in the museum. END_OF_DOCUMENT_TOKEN_TO_BE_REPLACED Caitlyn Parker, a former intern at the Wilderness Road Regional Museum, will explain the history of storekeeping in Southwest Virginia during a presentation at the museum on Saturday, November 15, 2014,  at 2 PM. Parker has completed a study of a store ledge held by the museum, and her talk will explain commerce along the Wilderness Road during the early part of the 19th century. END_OF_DOCUMENT_TOKEN_TO_BE_REPLACED
The Wilderness Road Regional Museum is hosting its annual summer fundraising event at Hillcrest Farms in Dublin on Saturday, July 19, 2014, at 6 PM.

Hillcrest Farms is home to Ann Bolt and her late husband Ben Bolt.  R.E. Wysor, a Pulaski native, built the historic house in 1910. The house is surrounded by beautiful farmland and allows guests to take in the scenic view while enjoying a home-cooked meal with friends and family. END_OF_DOCUMENT_TOKEN_TO_BE_REPLACED

The museum will be open by appointment only throughout Fall 2020. Please e-mail [email protected] to set up an appointment.